I’m A Podcast, Get Me In Your Ears! 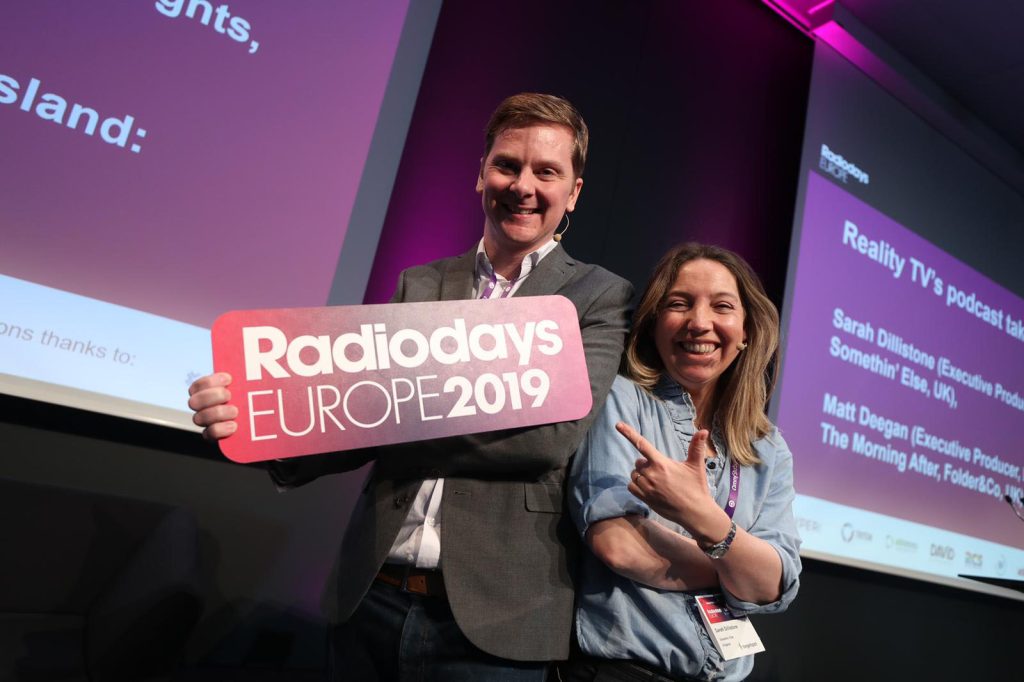 With mainstream media finally sailing full tilt into the teal waters of podcast, fans now have another piece of content from their favourite reality TV shows . The room applauded as two executive producers of reality TV pods walked out to tell delegates more about their work.

Matt Deegan (Love Island: The Morning After) was first up with a presentation about the podcast spin-off of ITV 2’s Love Island.

Where did the podcast come from? ITV saw rapid growth of reach for the show, so with that came more sponsors and ITV needed more Love Island property to place them, so the podcast was put out to tender.

One challenge, Matt explained, was working with a mainstream broadcaster. “ITV didn’t know how the production of a podcast would work or look like” Matt explained and showed a video he sent to them, showing the production facilities; – where the crew will watch and write the show, the studio it will be recorded in, etc. Matt cites this as one of the most useful tools for reassuring ITV in their venture into podcasting.

ITV explained they wanted last year’s Love Island winner to host the show, which Matt was initially wary of, but admitted after the first few shows “It was an amazing relationship, Kem was fantastic, and it made me re-think reality TV stars and what makes them popular”.

Each episode of the podcast was around 20 minutes, which was crucial Matt said, to maintain listener’s attention with the daily release of the podcast.

Was it a success? Well the podcast was the most successful new UK podcast in 2018. Three million downloads over the eight week series, it was – more often than not – #1 in the Apple Podcast chart.

Matt left the room with how they can make a reality TV podcast. “Special access is helpful, of course, but not everything” says Matt. The podcast was also successful through maximising the opportunities for 1-click listening, and respecting people’s time with efficient editing.

Now Sarah Dillistone, Executive Producer of The Brights, sits down to chat with Matt about the podcast. Sarah created the reality show Made In Chelsea, and with a wealth of experience in reality TV, set out to create a podcast with Lydia Bright (from The Only Way Is Essex) and her family – The Brights.

The talk focussed on funny stories about working with such an over-the-top and excitable family, as well as the challenges for Sarah of switching from TV to audio production. She said of television “when your kitchen becomes a TV set people put on a facade. Whereas podcasting is more natural”.

Editing was another challenge, Sarah explained, “a picture tells a thousands words so it was a challenge at first to set scenes and describe physicality”.

A session packed with information about working with mainstream broadcasters for podcasts and getting the best from reality stars!

PrevPreviousRefreshing BBC Radio 2
NextPresenters Are Top Athletes: Give Them The Best CoachingNext