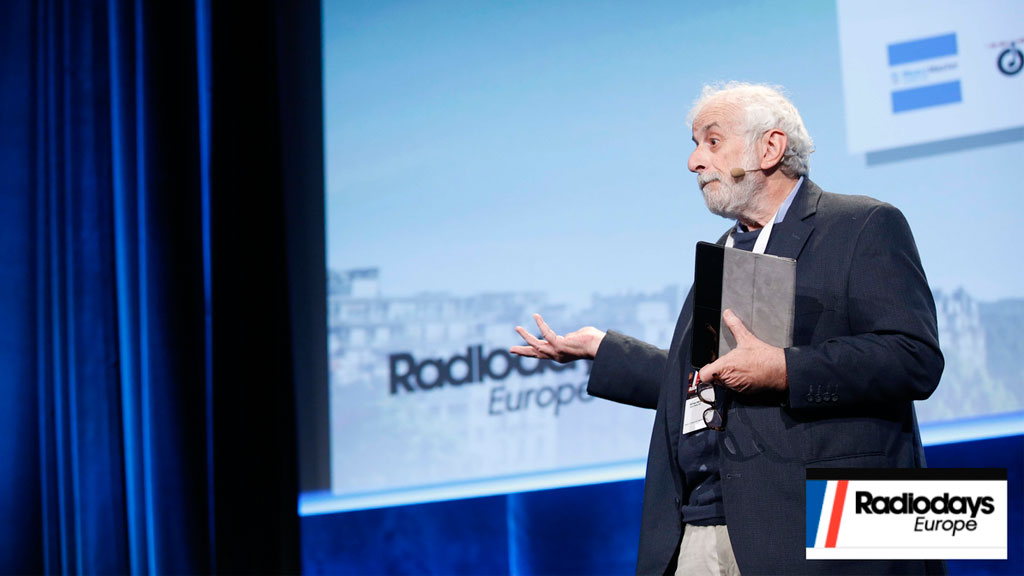 Michael begins by stating that the world of radio is so sophisticated and the presentations he’s seen throughout Radiodays Europe have been so incredibly humbling that his usual list of 15 pointers has been whittled down to about two that might be unique from American radio.

‘We shouldn’t fall victim to the obsession with television’, Michael argues, ‘radio must be your priority’. There’s a difference in the way video and radio are consumed by the human psyche, ‘If a presenter starts to perform for the camera they are likely to go from creating great radio to making crappy television’.

So what can be done for the screen that doesn’t detract from the quality of the radio? This is a huge challenge facing stations everywhere. As curators of radio we are wise to remember at all times that, ‘Radio is the theatre of the mind, we don’t need sets, we don’t need pictures. We operate in an infinite universe’.

Michael discusses a time he met Sting and asking him what it’s like to no longer be cool and to be mainstream, Sting replied by saying, ‘Gee, I never thought about that’. He will spend far more of him time being old school than being cutting edge, just like Lady Gaga and just like The Beatles and just like everybody else in this room.

He goes on to say, ‘No matter how cool anyone here thinks they are, you will spend most of your life as a has-been. But, it’s better to be a has-been than a never was’.

‘The next era will be the quantum era, it will relegate everything we currently know to the dark ages’.

The two things we can learn from American radio, Michael finishes by telling us, is that they have to deal with stifling debt, spending millions of dollars investing in a device nobody in the room has with them, ‘Don’t bite off more than you can chew!’