The Pod Doctor Will See You Now 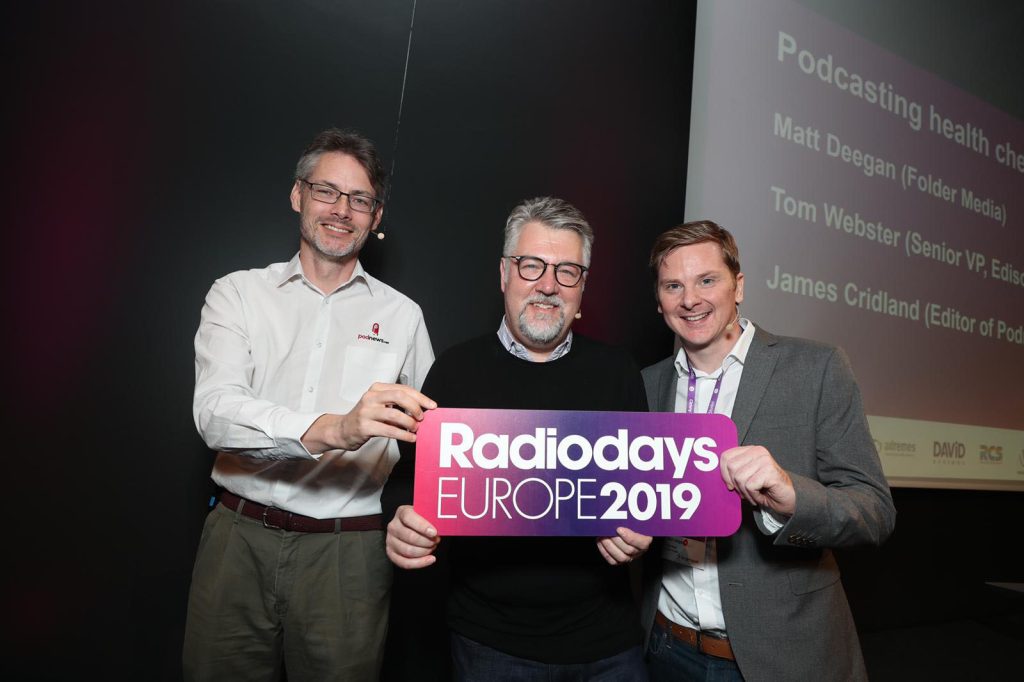 Matt Deegan introduced James Cridland and Tom Webster to the stage in a session that takes stock of where the podcasting is in 2019.

Forcing the audience to stand up and sit down as a sorting mechanism, Matt discovered around 50% of the delegates are involved in the making of podcasts. A keen roomful of podcasters then welcomed Tom Webster to the stage where he discussed Infinite Dial’s research in the podcast sector and treated delegates to a mass of podcast stats.

Podcasts have seen huge growth this year and Tom labelled it “the most significant jump we’ve seen in the last 15 years”. 70% of Americans (12+) say they are ‘familiar with the term podcast’, but far fewer know how to find, and listen to, podcasts. 51% of Americans now say they’ve listened to a podcast at some point, and around 62 million Americans listen to podcasts on a weekly basis. When Matt asked why podcasting has grown so rapidly, Tom replied “We have more high quality programming in podcasting, and streaming platforms – such as Spotify – adopting podcasting”.

James Cridland, owner of Podnews.net, then stood up to talk about some global podcasting statistics.

Ready, folks? Apple iTunes and Podcasts serves 60% of global podcast consumption, with Spotify at 8.5%, and all other providers trailing behind. Spotify has actually overtaken Apple in a number of countries and has significant prominence in South America. 21% of listeners never return to podcasts if they are too long, so James underlined how vital it is to edit your podcast to the shortest it can effectively be. 0.12% of podcast downloads are to smart speakers, so this seems far less important than one might expect…for now.

James asked himself “Why don’t radio fans listen? They just don’t know why they should, so that is for radio to explain”, and he left delegates with the importance of mixing podcasts to -16 LUFS, so that they are at a similar volume to notifications and other mobile audio.

A rich and insightful Q&A followed where delegates were able to pick the brains of these podcast experts and rounded off a session full of knowledge and facts.