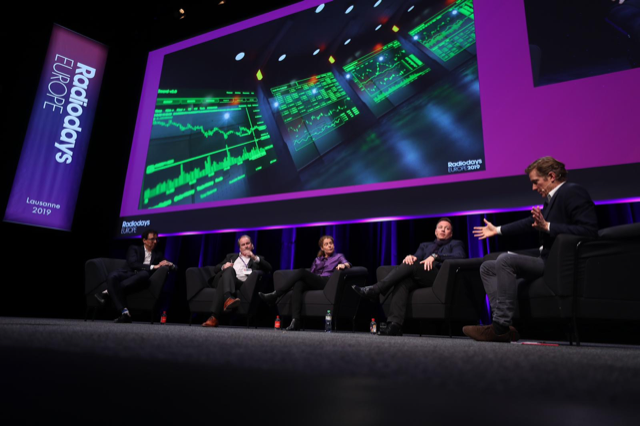 Thomas Buch-Andersen, from Danish Radio, introduced the panel and dived-in with the question “What is the most important thing in radio right now?” which was almost universally responded to with the challenge of the quickly changing media landscape.

Darren Davis (iHeart Media) said “Yes, audio’s hot right now, but if we’re not careful we’re going to blow it. We have to have a strong backbone” and Bob Shennan (BBC) answered “I don’t think radio has ever faced such a challenge from so many directions, nor do I think radio has ever felt so resilient. We need to seize the moment and be innovative.”

“Is there a crisis in reaching young audiences?” Tom asked. Cilla Benko (Swedish Radio) said “No, but it is a challenge” and she continued by highlighting the importance of making radio young and sexy again. “Podcasts is just radio on-demand” she said.

Bob agreed with Cilla broadly. According to him the industry is not in a crisis but something significant needs to be done if we are going to survive and prosper. He mentioned “10 million under 35s tune into Greg James’ breakfast show on BBC Radio 1, which is a huge reach, but yes we have seen decline.”

Dani Büchi (Energy Switzerland) said he sees things as opportunities rather than problems. He reminded the delegates of the incredible potential and positive aspects of social media, and how it can help with engaging an audience – 15 years ago that tool would have been unimaginable.

Thomas quizzed the panelists on podcasts and their relationship with radio. Darren Davis brought up iHeart’s 160 million podcasts downloads, 40% of which is made up of broadcast content that is re-distributed as a podcast.

Bob was positive about radio compared to other traditional media: “I don’t think, necessarily, radio is going as steeply in the direction of television, because of the essential nature of radio and how people consume it”. And the positivity continued with Darren, who said “Radio is a companion. Television is a hobby. You swap hobbies much more often than you do companions”.

Cilla went on to discuss the importance of public service broadcasters, challenging opinions brought up earlier in the day from other speakers about the dominance of commercial radio. Bob backed this up “The thought that commercial radio can succeed without the BBC, or vice versa, is a nonsense.”

This was an incredibly diverse range of radio topics covered in a short amount of time, but an insightful session with takeaways about the challenge of social media, the crucial role of public service broadcasters, and how to innovate for the future.