Cathrine Gyldensted: “Are we looking at progress or setbacks?” 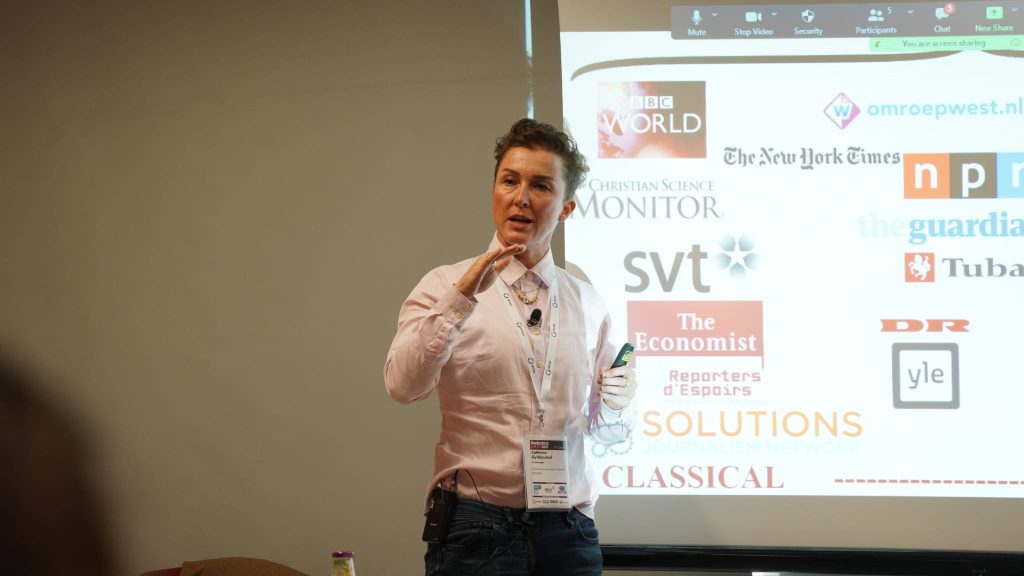 Cathrine Gyldensted sees journalism from a different viewpoint. For her, journalists should talk not just about problems but also their their human side, potentials and possible solutions. After more than ten years in radio and TV Danish journalism, she has been involved in constructive journalism. She is also the founder of Constructive Journalist Network.

The journalist researcher described traditional and progressive media. The first tries “to show how the world doesn’t work, what is wrong with the world”, giving examples of BBC News or The Economist. The second one not only describes the “big picture”, but also aims for “factfulness”. They investigate a “solution focus”, based on thinking about the future. Cathrine Gyldensted is a pillar of this way of thinking about journalism, to cover progress, evolution, how the world should be, and closeness to people: “Are we looking at progress or setbacks?”

We were introduced to Louise Haag, Head of editorial planning of Sveriges Radio. She looks for stories that drive her, that are passionate, different and constructive. “We need to involve the parents in school.” Louise talked about constructive criminality, a new approach inside constructive journalism.

Some of the attendees asked several questions about Cathrine and Louise’s experiences – they discussed various subjects like political polarization, editorial choices, interviews, angles of approach and the relationship that journalists have with stories and people in general.

Cathrine tells us a story. A long time ago, she interviewed a woman who had lost her home. The interview changed her: encouraging her to become less factual and more deep and personal: in her words, “constructive”.

PrevPreviousMethod to madness: How to structure the development process
NextGiving a voice to women in mediaNext