Women Sticking Together At Radiodays Europe 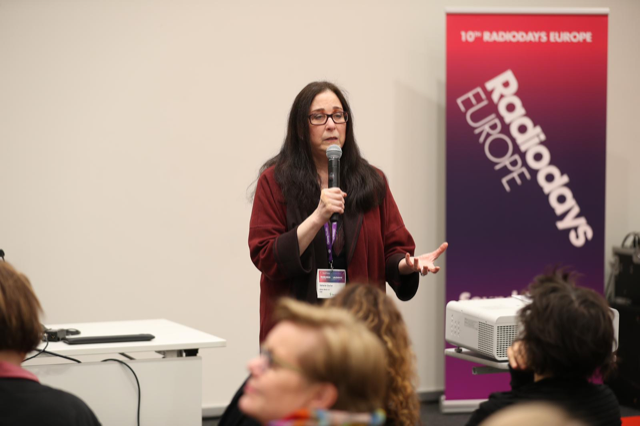 Cheyenne Mackay hosted the session, and introduced keynote speaker Heidi Sivebaek, who is Diversity and Accessibility Editor at the Danish Broadcasting Corporation. Heidi inspired attendees to change the fact that 66% of voices we hear on the radio are still men, and that only 19% of experts on the radio are women. She reminded us that “what you see and hear is what exists” and that radio could miss out on talent, knowledge and humour if we keep to the status quo.

Several sessions from women around the world followed…

Megan Wastell, Product Director at Global in the UK, admitted to being a recovering perfectionist and advocated failing fast, trying different things, starting somewhere and simply seeing what happens.

Kelly Doherty, who owns TheImagingHouse.com, spoke about being a female voiceover and said “you must ask or you will never get”. For example, she asked for the  title of Vice President of Imaging for iHeart Media, and she got it.

Helen Thomas, Head of Content Commissioning at BBC Radio 2, gave five pieces of advice. She said be curious, be open minded, be focussed and the best you can be, be positive in the face of setbacks and develop perspective and be thankful. Never forget how lucky we are to work in radio.

Paula Schuchman and Emily Botain, both from WNYC, talked about equal pay and said that they figured out their jobs as they went along. “We never actually felt qualified for them when they started”.

Jessikka Aro, an Investigative Journalist from YLE in Finland, was inspired by her grandmothers, who raised her and made her interested in Russia. She has made it her career goal to expose what she sees as Russian fake news.

Valerie Gellar, a Consultant and Author at Gellar Media International, said “there’s no success like failure” and that perfectionism is not how human beings work or how creativity works. She advised, “tell the truth, make it matter and never be boring”.