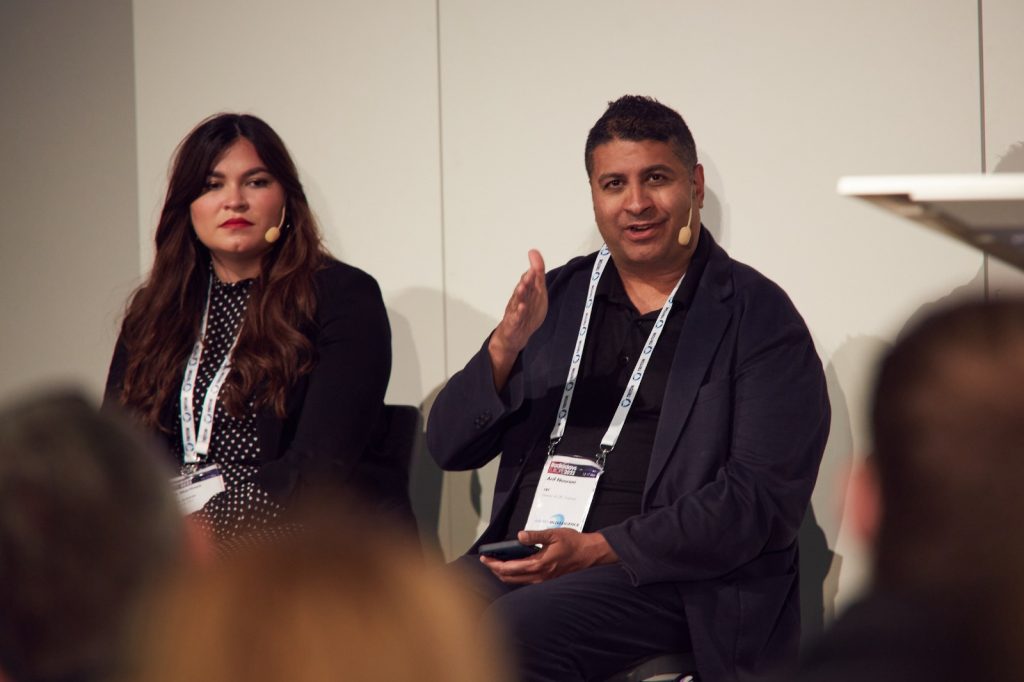 Julie Shapiro, from PRX and Radiotopia, was the first person to speak.

She knows what it is like to run a successful podcast, having looked

after Ear Hustle, the first podcast created and produced in prison.

But, how can people get a show on Radiotopia? It’s difficult and

there’s a lot of ideas.

“Someone is literally pitching a show to us right now”.

But, there is space for success, and aspiring podcasters just need to

pitch something that is not being made anywhere else.

Arif Noorani, the Director of CBC Podcasts, spoke next. His

organisation is dominating the podcast space in Canada and elsewhere.

He’s just launched a new slate of podcasts with CBC, focussing on

necessarily, but he wants passionate storytellers who are desperate to

bring their vision to life.

Then Lory Martinez, the Founder and CEO of Studio Ochenta, spoke. Her

podcasts. With Studio Ochenta all of the new podcasts need to resonate

with more than one country. True crime does very well in almost every

country around the world! But Lory is keen to find new formats and

ideas for shows which will work in different places (preferably more

than one place at the same time).

After taking about pitching shows, James then moved the conversation

onto money. Arif has just launched a subscription channel at CBC

earlier on this platform than elsewhere.

“It’s an experiment to see if we can raise more money”.

CBC is hoping that the experiment will pay off and, if nothing else,

they hope that Apple will support their projects more.

Radiotopia has experienced “some confusion” with their subscription

podcasts on Apple, but, for Julie, she believes that it is certainly

part of the future of podcasting, so she’s investing in that.

The group finished their conversation baby talking about success. How

do you judge whether a podcast is a success? Lory Martinez looks

beyond the downloads she receives. She focuses on website traffic,

community dialogue and listener engagement too. For Julie Shapiro, she

wants to make sure that her producers feel satisfied and supported

with their work. And for Arif Noorani, it’s much broader. He wants his

teams to be creatively ambitious and push boundaries. That is success

PrevPreviousRadiodays Europe Women kicks off #RDE22
NextHow can you make money from podcasting?Next