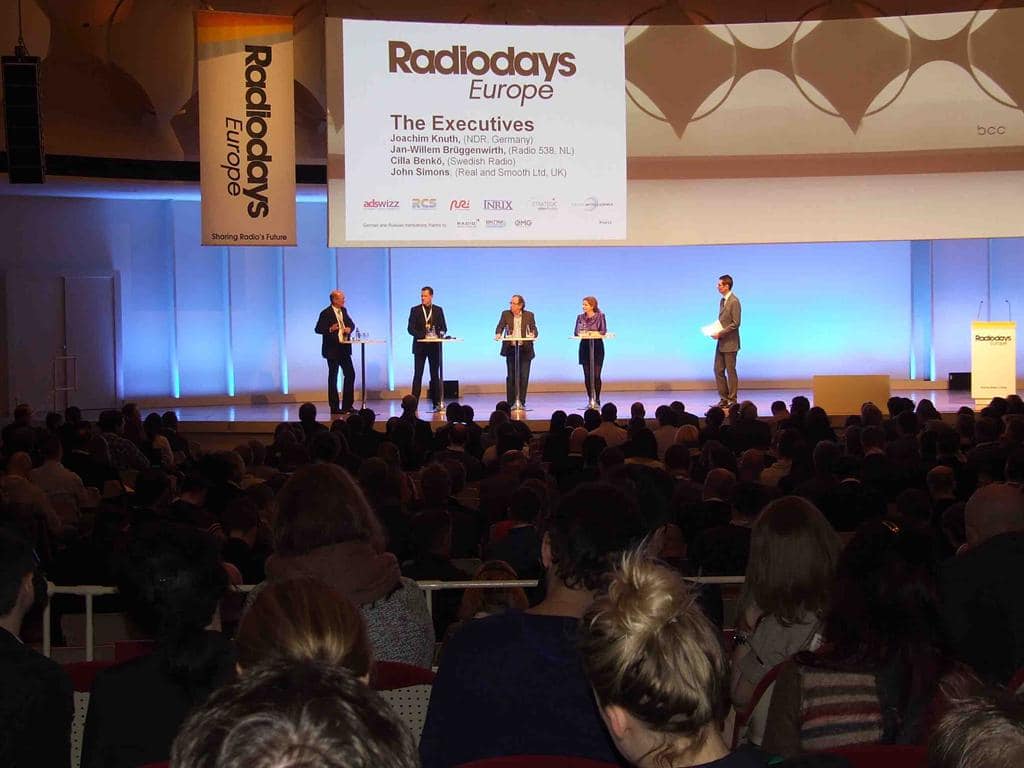 Radiodays Europe 2013 welcome reception was held at the Parochialkirche (a reformed church) in the centre of Berlin, the acutal venue for Radiodays Europe was the Berliner Congress Center an old style building which added atmosphere to a great event.

Rolf Brandrud, co-founder and project manager of Radiodays Europe “This year we scored an impressive additional 50 percent in the figure of registered participants…This raises the number from 700 people who registered for last year’s edition in Barcelona to about 1,000 attendants for the present edition. This is a great success. We are bringing together 1,000 people passionate about radio, but this attendance figure is a clear sign that, beyond passion, radio is still a business and an effective one”.

Anders Held, one of the Project Managers of Radiodays Europe said: “We are excited about the fabulous interest from the radio community in coming to Radiodays Europe to share ideas and experiences. This fits with our theme ‘Sharing Radio’s Future. “We strongly believe that radio has a future in this multimedia world and that Radiodays Europe can act as a focus for the radio industry and a platform from which radio shows how important it remains. (Radiotoday.ie)

Two workshops were held on the Sunday of Radiodays Europe 2013; a boot camp about radio sales with Paul Weyland, a sales strategist, USA and a training session on editorial leadership in the newsroom by the BBC College of Journalism.

Monday was the official opening of Radiodays Europe 2013 was started with two keynotes from Stefan Möller (AER) and Annika Nyberg with an executive panel to follow which included a session from BBC journalism hosted by Jane Kinghorn, BBC Senior Trainer & Creative Consultant and Mia Costello, BBC Client Manager.

Speakers and the programme included:

International top speakers include: Robert Krulwich from the acclaimed “Radiolab” (US radio NPR), talent coach Valerie Geller, the president of the European private radio AER, Stefan Möller, as well as cross-industry representatives of Twitter, Spotify or EMI Music , The topics range from channel-specific programs, experiences with digital radio, discussions about convergent currency and measurement methods to sales strategies for the radio of the future. The conference language is English – with the support of Radiozentrale, a German translation service will be offered for the first time this year. (www.radioszene.de)

In his article from Radiodays 2013 Trevor Dann said:

Radio conferences can be a bit gruelling. I know because I’ve organised a few. Some of the best planned sessions can be ruined by people talking too much, dull powerpoint slides, failing microphones. You’ve been there too right? So it’s a pleasure to report that RadioDays Europe 2013 in Berlin was a technical triumph. As far as I could tell everyone who could hear the speakers, the sessions started and finished on time, the exhibitions were interesting, the food was palatable (though not as extensive or as tasty as the smorgasbord at RDE 2011 in Copenhagen) and the atmosphere was genial and creative.

More importantly, there was a refreshing absence of the showing off which has come to characterise the

Robert Krulwich’s talk about Radiolab, his programme for NPR. It’s a truly innovative concept which plays with sound in a radical and exciting way and he delivered an inspiring call-to-arms about the value of experimentation in radio. With 4.5 million podcast subscribers worldwide, he should know what he’s talking about.

I also enjoyed Susan Marjetti from CBC Toronto making the business case for diversity. If your programme team doesn’t look and sound like your audience then you need to do something about it and her show proved it by going from 6th to 1st in its market and staying there. The Radio Today Programme I recorded in Berlin is available here. It features both Robert and Susan as well as many other impactful speakers. Here’s to RDE Dublin 2014.